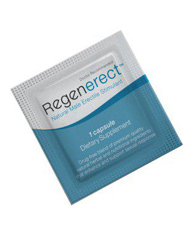 Regenerect is a male enhancement pill created by Regeneca International and is positioned as a drug-free formula for the enhancement and support of sexual experience among men. The same company peddles a product called Regeneslim, a dietary supplement for controlling appetite. Regenerect is particularly designed as an alternative to erectile dysfunction drugs, and is recommended for once-a-day intake, an hour before sexual intercourse.

We found out, however, that it also contains Sulfoaildenafil, an analogue of Sildenafil or the active ingredient of prescription ED drugs such as Viagra. This, as well as the ingredient’s potential to lower blood pressure to dangerous levels, is not disclosed. This led to an FDA ban issued on Regenerect and an ensuing recall. The new formulation does not carry the said ingredient, as its marketing and promotions state.

The positive aspects of Regenerect that stand out include its being a one-a-day pill solution, as well as its free male enhancement guide with every purchase. Note, however, that there are shortcomings to be addressed as well, including the lack of disclosure of the manufacturer’s history, the bad rap brought by the previous FDA ban, and the seeming lack of focus in its claims for male sexual enhancement.

It will be very difficult for Regenerect to escape its dark past, given that it is a deliberate attempt to mask the pharmaceutical component of the product that is otherwise promoted as natural. This doubles the burden for it to prove its quality and safety. With current deficiencies such as the basic product and manufacturer information details we need, it is not very easy to endorse Regenerect as a trustworthy erection pill for men.