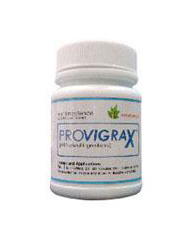 Provigrax claims that it is the ultimate male enhancement oil with its “revolutionary stop-impotence” formula that is designed for stronger, more lasting erections. It boasts that while being prescription- and side effect-free, it can duplicate the benefits of male enhancement drugs such as Viagra, Cialis, and Levitra. Its targets are the same as those of these medications – said to be done only better, faster, and safer by the supplement. The makers of Provigrax also claim that it can be taken while you consume alcohol, considered among its advantages to other ED supplements today.

Some of its key ingredients are niacin, vitamin B6, L-arginine, L-phenylalanine, epimedium, and maca. These perform various uses and functions, such as niacin or vitamin B3 enhancing energy and positively impacting blood vessels, and vitamin B6 also assisting blood vessels to expand in order to accommodate larger blood quantities for erection. L-arginine, on the other hand, optimizes the production of nitric oxide for blood vessel expansion as well.

On the upside, Provigrax mimics the benefits of prescription male enhancement drugs such as Viagra and Cialis, and at the same time eliminates the need for prescription. It also ships fast and efficiently, and enjoys good patronage as shown by positive or glowing reviews and testimonials on the Web.

O the flip side, Provigrax only reveals a partial list of its ingredients, and it appears to also makes contradicting claims of having “medicinal” properties and yet being natural in formulation. These sound like miracle-pill claims to us and that is not a good starting point for transparency. Additionally, the sexual enhancement claims seem to be limited to erection quality, and remain mum on other crucial areas such as sexual stamina, libido, and orgasm intensity, to name a few.

To sum it up, how are we sure that this formula comes only with the benefits and not the potential risks and side effects of the drugs it’s trying to mimic? Consider that it has a few lack of disclosures (including ingredient list and composition), and does not provide attention on aspects such as extended stamina or fighting premature ejaculation. We are saying no to Provigrax in the meantime because of these concerns, and overall because of its self-contracting statements and marketing points.