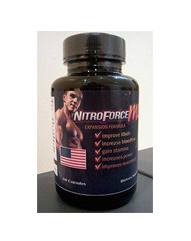 The focus this time is on Nitro Force Max, a nitric oxide supplement that’s promoted to keep a male user’s energy levels at peak when one is working out at the gym or simply looking to boost overall strength and endurance. While can be classified as a male enhancement supplement, this product is mainly for bodybuilding, muscle-building, and other male health concerns. It is dubbed a revolutionary formula for increasing your stamina for both exercising and lovemaking.

Nitro Force Max, according to its official site, allows its users to improve their libido fast, enjoy more optimal blood flow, and an enhanced sexual stamina and endurance in the gym. Its ingredients include A-AKG, A-KIC, OKG, and other undisclosed ones. It offers a Free Trial program, although this feature has earned negative feedback due to its so-called deceptive terms.

This bodybuilding slash male enhancement supplement has a couple of good aspects to it, including the focus it has on strength and stamina for bodybuilding and those with athletic pursuits. Its improvement of nitric oxide production is important not only for building muscle, but also for ensuring there is sooth sexual functioning. On the other side, it sorely lacks the clinical data and results necessary to prove how Nitro Force Max exactly benefits its customers. Additionally, the penis enlargement claims the products has borders on the ridiculous and excessive, while the free trial is largely deemed a scam by those who have tried it.

While boasting of a certain success rate in improving energy and performance in bodybuilding as well as in the bedroom, Nitro Force Max keeps us in the dark as to how it exactly works and benefits sexual enhancement optimally and with great value for money. It’s not just that the clinical findings and ingredient list fall short; the marketing is also spotty and Nitro has been implicated in a fraudulent Free Trial and other claims. Serious work needs to be done to repackage this product and make it worth everyone’s while.