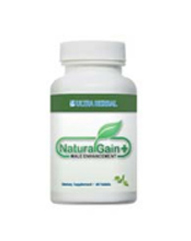 Natural Gain Plus is another male enhancement supplement that claims to be an incredible formula for great improvements in sexual performance. According to its website, it has been developed by the best scientists in the sexual enhancement trade, focusing on a remedy that will not pose a risk to general health. It is touted versatile as an all-around sexual booster, with special ingredients to address lovemaking issues such as poor sexual desire, quality, and ejaculation amount.

The positive aspects of Natural Gain Plus include it unique herbal ingredient blend, putting together a formulation that is quite different from many others. The safety and effectiveness, however, is an entirely different thing. We also laud its 2 Free Bottle offer present on the site, which can spell some form of savings. On the other hand, the official site is deficient in manufacturer and product details, as well as clinical studies and other important FAQs. Note, too, that this product is relatively more expensive than others.

Truth be told, we initially felt that Natural Gain Plus is so promising and full of potential. Upon closer inspection, however, we see that it hardly stands out in the male enhancement game. For one, while boasting of a unique formulation, it does not offer hard data to strengthen its claims of benefits and safety value. We also see a number of disadvantages, namely the costliness, the lack of manufacturer’s information, and the lack of exact focus on erection, stamina, and other benefits.