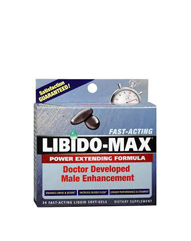 Libido-Max is another male enhancement supplement that puts forward three stages of improvement. These three stages are (1) drive and desire, (2) increased blood flow, and (3) performance and stamina. It boasts of recent scientific research on L-arginine and its power to dilate blood vessels and help in enhancing blood flow to the penis. Optimal blood vessel functioning is also deemed a crucial component of producing and maintaining erections. According to Libido-Max, the three-stage formula – combined with targeted nutraceuticals – will support a strong libido and promote utter sexual enjoyment and performance like no other.

The positive attributes of Libido-Max include its availability in a wide range of stores, include Walmart and GNC. Additionally, the soft gel formula is a breath of fresh air, particularly for those who want an option other than traditional hard capsules. Enhanced libido, too, is a good targeted first step to achieving male enhancement. However, note that it doesn’t stop there, and there are deficiencies that we notice in Libido-Max, including (1) its yohimbe content, (2) its up to four soft gel daily intake that reeks of waste and extra costs, and (3) lacking clinical data on the product website itself.

We think that Libido-Max has good intentions for male sexual desire and appetite – it met our expectations as far as inciting better sex drive is concerned. It also pays attention to blood flow improvement, which is integral to erectile status and health. But it has marked deficiencies as well, as such as the great need to optimize its daily recommended intake. Up to four soft gels a day sounds wasteful and indicative that the product may not be potent enough in a single soft gel. Additionally, yohimbe is something you don’t ideally add to the formula, on top of other safety warnings such as Libido-Max containing a chemical known to the State of California (Prop 65) to cause birth defects or other reproductive harm.