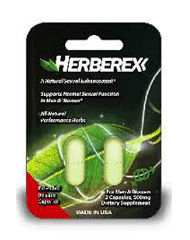 Herberex is a male enhancement supplement that claims to be made up of natural holistic ingredients that work to enhance and restore lost desire and sexual function. It claims to use an integrative and homeopathic medical approach, allowing men and even women to enjoy increased libido, stamina, and continued sexual functioning without negative side effects. It is formulated as a supplement but promotes that it has also been prescribed by eastern medical practitioners for centuries to help remedy various medical conditions.

Herberex boasts that it is produced in a GMP-certified facility, or under the strictest standards of safety using only the highest-quality naturopathic materials. Every batch is said to be lab-tested to certify that what’s stated on the label is followed and no unlisted components are present.

The positive attributes of this sexual enhancement product includes its availability in various package options, such as in an 80-capsule pack or 10-capsule pack. It also delves on the importance of enhanced testosterone for good sexual functioning, as well as also discusses women’s sexual health and needs. But we’re afraid these are all there is to Herberex that is good and satisfactory.

For one, the full ingredient list is not disclosed by the manufacturer, and less than five primary components are mentioned. This makes it difficult to trust the formula or study how it truly works. It also makes too-broad benefit claims, which confuses us as to what it can truly provide in male erections, sexual stamina, orgasm control and intensity, and energy and performance in bed. We are rendered powerless by the lack of these important details, including hard data to vouch for its safety and effectiveness.

It appears to us that Herberex is a kind of Johnny-come-lately in the sexual enhancement field and many not be at par with other supplements of kinds in many different areas, mostly in quality and safety value. We would be wary of taking a product like that that has plenty to hide from its prospective customers.