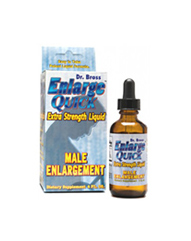 Enlarge Quick is a male enhancement product that promises an increase in penis size by up to 5 inches, and in width by up to 50 percent! If this sounds too good to be true to you, read on for more information. It takes the form of a potent liquid formula that is said to quickly absorb and accelerates the process of sexual enhancement. It’s not just about a longer, thicker penis, but also touts increased sexual stamina, improved sexual performance, and increased frequency of lovemaking every night. It is considered extra strength for men who have an average or small manhood that needs help.

The positive attributes of Enlarge Quick include its rare liquid formula, a breath of fresh air amid male enhancement pills and capsules. It also provided a concrete timeline of benefits for users to expect. Additionally, this supplement lists the United States as its country of origin, a factor that appeals to those who are conscious of the quality and the country of manufacture of the products they take or use.

On the flip side, it is unfortunate that Enlarge Quick contains yohimbe, which has been documented to cause a number of noticeable and rather serious side effects. Additionally, there is a severe lack of important product information on the side, which leaves potential customers in the dark as to its crucial details before purchase. It also fails to capture science on its side with its deficiency in hard data (clinical findings) to show its advantage to other products of its kind.

We would entertain the thought of buying Enlarge Quick for its unique formula – a liquid blend that can truly provide better absorption. But upon closer inspection, you will see stats that while it claims to work better than most pills today, it can take three to four months to work, a performance exceeded by top-rated male enhancers in pill form. It should also seriously reconsider the addition of yohimbe, which could pose several health consequences. Information is critical in this analysis, so we hope to be provided more bits of it to know more about Enlarge Quick and its distinct actions and effects.