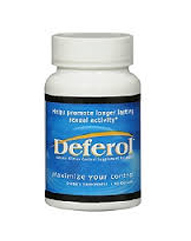 Created by iDist Laboratories, LLC, Deferol is an over-the-counter premature ejaculation pill that is promoted to be scientifically designed for helping men last longer in bed – the natural way. It is called a “natural science innovator” and is claimed to be pharmacist-formulated. According to its makers, unlike other serotonin pills, boosters, or supplements, Deferol has the required cofactors and relaxants for maximum control of premature ejaculation and for lasting longer in the lovemaking. The so-called maximum-strength climax control male pill has the science of premature ejaculation pill research, serotonin (5-HT) research, dopamine, GABA, and natural components.

Deferol is touted to have a patented blend of ingredients, including griffonia seed extract, passilfora coerula plant extract, and essential vitamin compounds and enzymatic cofactors that comprise vitamin B6, active vitamin B6, vitamin B9, and other ingredients that help convert 5-HTP to serotonin (5-HT) to its active, useful form.

The positive attributes of this male enhancement supplement include its presence in known merchant sites such as Drugstore.com. Additionally, no prescription is required to obtain this product and try its beneficial action and components. On the downside, we would be marveled to know the full list of ingredients, which it has not disclosed. There is also a lack of attention to the different aspects of male enhancement science – only climax control, which is only a single part of the multifold problem of sexual dysfunction in men. Finally, there is a deficiency in product and manufacturer’s information that could guide buyers further.

As a summary, allow us to laud Deferol for its packaging and market presence, as well as the unique action of serotonin it promotes for maximum climax control and in fighting premature ejaculation. However, the brand needs to go beyond these pitches and get to work be the best and most reliable on the market. How is this done? For starters, it needs to address deficiencies, such as full ingredient list, manufacturer details, and effectiveness data that can help men make smarter buying decisions.