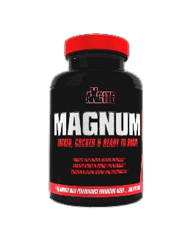 Axcite Magnum is a sexual enhancement formula that is designed to provide magnum difference in male enlargement, assisting in amping up the pleasure and performance levels in bed. It boasts of the so-called Magnum TST Technology, considered an all-natural, key alpha isomer ingredient for boosting natural testosterone status. This ingredient is deemed very helpful in men suffering from erectile dysfunction, causing firmer, harder, and more pronounced erections.

Included in the ingredients of Axcite Magnum are red Korean ginseng root, d-aspartic acid, epimedium extract, and pine bark extract. The pill has a number of promoted benefits that include longer-lasting and quick-to-achieve erections, more intense orgasms, increased sexual desire, better sexual satisfaction, and the elimination of embarrassing doctor appointments for erectile dysfunction.

According to its site, it does not matter if you are 21 or 61 years of age; the supplement is said to “help men feel more youthful and build a better body through naturally increased testosterone levels.” The supplement is also proposed to be a natural, non-prescription alternative to Viagra, Cialis, and Levitra, which are commonly prescribed for erectile dysfunction treatment.

The positive attributes of this male enhancer are aplenty, including its focus on testosterone boost for a whole range of male sexual and non-sexual benefits. It also sets expectations with its projection of benefits within a given period of time, specifically within a few days, and weeks one to three and beyond. Product discounts are also available in various online merchant sites.

Certain disadvantages, however, also reveal themselves. These include the fact that only a partial list of ingredients is revealed, with users lacking guidance on what the formula exactly contains. The recommended daily intake can also shoot up to six capsules taken three times, which appears to be not so cost-effective. The official website also lacks other information that can better guide consumers, such as citation and complete data of its clinical trial and research.

Axcite Magnum is packaged attractively, literally and figuratively – it stands out physically and in the realm of providing useful male enhancement benefits that other products can still leave out. Its promotion of improved testosterone status is laudable and relevant not just to sexual enhancement seekers but also men who need a boost of the male hormone. In the week-by-week benefit projection, however, we are quite taken aback that it can take up to three weeks to see erection benefits, which is quite the main focus of most male enhancers today. The recommended daily intake of up to 6 capsules appear to be quite excessive as well, and optimizing this recommendation can be instrumental in improving the product appeal.