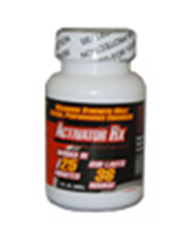 Activator RX, created by Activator RX Nutraceuticals, follows the lead of other male enhancement formulas in its “revolutionary” action that is estimated to set in in about 25 minutes… and to last for about 36 hours. This maximum strength male sexual performance enhancer comes in small 500 milligram capsules and is taken about half an hour before sexual activity, after which the user is said to be ready “to give [his] partner the ride of their life.”

Its formula is touted four time more potent than any other product on the market, and if this statement is not strong enough, it proceeds to claim that it is the fastest acting so far. The key is its advanced active dispersion technology, as well as its catalyst is osthole, a cumarin isolated from cnidium monnier. This compound stimulates nitric oxide production and in the process allows arteries in the penis to expand and fill with blood.

No side effect is said to be experienced when taking this sexual enhancement pill, with the manufacturer claiming that the key components of Activator RX have been taken over 100 million times without any reports of side effects.

The positive points of using Activator RX revolve around the emphasis on optimal blood flow, nitric oxide production, and neurological factors that usually hinder healthy erections from occurring. Much can also be said of the affordable price that this product has, although multiple intake (about two capsules taken up to twice daily) is a bit of a turn off. One noteworthy positive aspect of Activator RX is its combination of tested herbal extracts and nutrients that offer synergistic action in the name of sexual enhancement.

As for the negative aspects or disadvantages, we are looking for more clinical findings, complete ingredient disclosure and, as previously mentioned, a more optimal recommended dosing. But we are wanting, and this is what Activator RX can address to be more competitive in the male enhancement market that is seeing its timely boom.

We would recommend Activator RX today more for its price than the benefits it brings to the table, as there are others that can surpass those, but with the fine-tuning of its website information and more clinical data to enhance its positioning, this sexual enhancer can see better days.